You are here: Home / Events / Spend some time at Pūowaina (aka Punchbowl Cemetery)

Called Pūowaina in Hawaiian, the volcano erupted some 75,000 to 100,000 years ago. The lava formed an oval, bowl-shaped crater, alluding to the English name, “punchbowl”. Over the years the site has had many different uses.

Pūowaina (which can be translated as “Hill of Sacrifice”) has deep religious significance for the Hawaiian people. Long before Europeans arrived, it was a place where people who had committed certain crimes or “kapu” were put to death.

Today, the site is commonly referred to as Punchbowl Cemetery. Officially, is it known as The National Memorial Cemetery of the Pacific. The cemetery was established in 1949 when an unknown solider who was killed in the attack on Pearl Harbor became the first American to be buried at Pūowaina.

Many other soldiers who fell during World War II came to be interred at Punchbowl Cemetery, including from places such as Burma, Korea, Japanese POW camps, Guadalcanal, Guam, and Wake Island. Hawaiʻi is one of only two places in the Pacific where American soldiers are buried. The other is the Philippines.

While standing at the highest point in the cemetery, one can enjoy a commanding view of the Island of Oʻahu.

In 1976, The National Memorial Cemetery of the Pacific was placed on the National Register of Historic Places.

View from Punchbowl Cemetery (National Cemetery of the Pacific)–known to Hawaiians as Pūowaina–with Diamond Head in background – DepositPhotos.com

Memorials at The National Memorial Cemetery of the Pacific

The 112-acre cemetery holds thousands of graves. There are dedications scattered throughout the grounds. Here are some of the ones you might see during a visit: 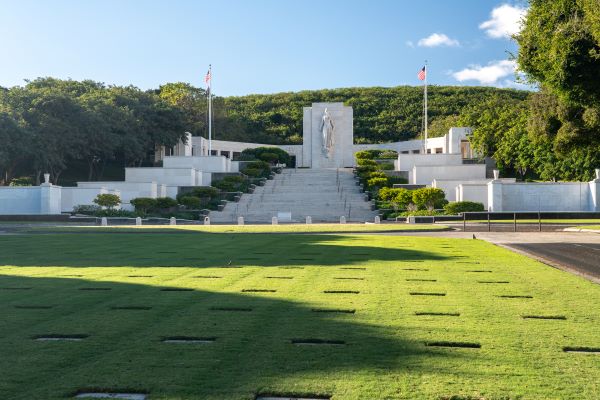 Honolulu Memorial at the National Cemetery of the Pacific – DepositPhotos.com

Punchbowl is one of the Honolulu’s most popular tourist destinations. Millions of visitors come to pay their respects each year. Some tours, such as Pearl Harbor and Circle Island tours include the National Cemetery, but only drive through without stopping.

However, it is well worth a visit to spend some time and reflect on those who have been laid to rest there. It is a moving and sobering experience.

Where: National Cemetery of the Pacific, 2177 Puowaina Drive, Honolulu, HI 96813 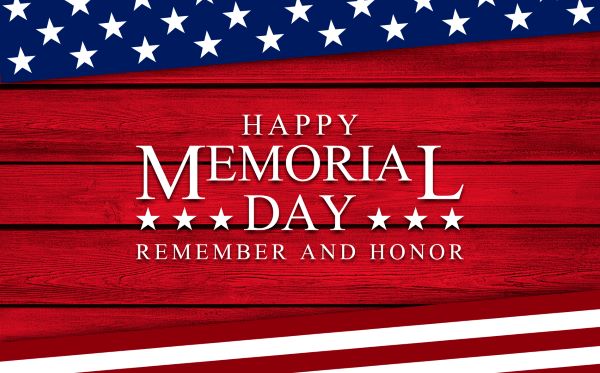 Hundreds of people attend the event. Parking is limited and public transportation (“TheBus”) is strongly recommended.

One of the more distinct traditions is the placing of lei upon every gravesite within Punchbowl for Memorial Day. Some 38,000 flower leis and American flags are placed on each grave on Sunday before the Monday ceremony. The effort includes numerous volunteer opportunities to help make ti leaf and fresh flower lei and “Sew a Lei for Memorial Day” events held around the island. As a volunteer, you can donate fresh flowers, learn how to make a lei, and help make the lei. Anyone can volunteer to help make leis; no experience is needed.

The Mayor’s Memorial Day Ceremony at the National Memorial Cemetery of the Pacific (Punchbowl / Pūowaina) was cancelled in 2020 and 2021 due to COVID-19 pandemic, including all “Sew a Lei for Memorial Day” events.

Mayor Rick Blandgiardi, the Honolulu Department of Parks and Recreation, and all of the supporting organizations who normally facilitate this event  encourage the public to mark the holiday with their own individual displays of appreciation for those who came before us and made the ultimate sacrifice for our benefit.