You are here: Home / Entertainment & The Arts / Introduction to Hawaiian music styles and instruments
← Halloween events and things to do across the Hawaiian Islands
Hawaiʻi International Film Festival →

As missionaries and immigrants to Hawaiʻi introduced their vocal styles and instruments, Hawaiians adapted each one to create modern forms of music that remain uniquely Hawaiian.

Below we offer an introduction to traditional Hawaiian instruments and song styles, followed by modern forms adapted by Hawaiians through the use of string instruments, melodic songs, and vocal styles from other parts of the world. 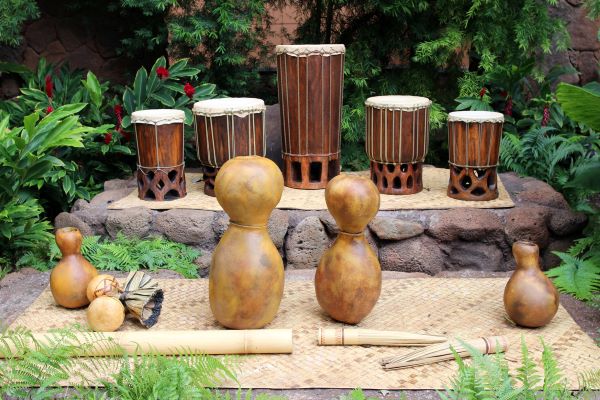 Ipu: A gourd played while seated or standing. There are two kinds of ipu: the ipu heke (double gourd) and the ipu heke ʻole (single gourd). The two basic beats are “u” (downbeat) and “te” (upbeat). If seated, the downbeat is played by striking the gourd on the ground. If standing, the downbeat is struck with the heel of the hand. The upbeat is always played with the fingers.

Kāʻeke ʻeke: A simple drum made of a stick of bamboo (ʻohe) that is open on one end and closed on the other by cutting at the bamboo’s natural joint. Kāʻeke ʻeke are played by striking them on the ground.

ʻOhe Hano Ihu: A 3-holed bamboo nose flute played by blowing across the holes through the nose while pinching one nostril shut. Traditionally used throughout Polynesian cultures for courting due to its soft gentle sound.

Pahu or paʻu: A drum, preferably made from the stump of a coconut (niu) tree. Today the pahu is capped with cowhide. However, sharkskin was used ancient Hawaii. Pahu have long been sacred to Hawaiians, who made different types of pahu for religious ceremonies (heiau pahu or pahu puʻule) and for hula (hula pahu). It is the official traditional instrument of Hawaiʻi (with ‘ukulele being the modern one). The paʻu is played with the hands to produces a low but full resound.

ʻUkeke: A small, hand-held 3-string instrument, indigenous to Hawaiʻi. (So, the ʻuklele was not a completely foreign concept to Hawaiians.) Composed of a footlong piece of wood about one-inch wide, with three strings (traditionally woven from coconut fibers or hair) attached the length of the wood. It is played using the mouth as a resonance chamber while strumming with the fingers.

The following YouTube video features an ʻukeke demo by craftsman Mahi La Pierre playing an ‘ukeke that he made:

Mele means song or chant in Hawaiian. There are two types of mele in traditional Hawaiian music: mele oli (sung a cappella) and mele hula (accompanied by dance).

Mele hula are chants or songs accompanied by dance. In contrast to the simple melodic line of the mele oil, mele hula are more complicated musically and use more notes and rhythm.

If you watch the video on YouTube, you’ll find the complete Hawaiian text, which in typical tradition is nuanced in meaning and much more elegant in phrasing. It can give you great insight into—and hopefully appreciation for—ancient Hawaiian culture.

Modern Hawaiian music continues to evolve. Hawaiians adapted the instruments, melodies, and song stylings of those who arrived on her shores, and made them uniquely their own. These new Hawaiian music styles include leo kiʻekiʻe or male falsetto singing, the ‘ukelele, slack key guitar, and many beloved songs.

Read more about each of these music styles in the sections below, along with video examples.

Western falsetto and yodeling were introduced by Mexican cowboys to Hawai’i in the early 1800, which Hawaiians naturally adapted. Western falsetto is characterized by a smooth transition from the low to high notes.

Hawaiian falsetto exaggerates the transition from low to high by adapting vocal techniques, referred to as kauna, already used in mele oli.

Leo kiʻekiʻe (“high voice”) continued to blend in other musical forms introduced to Hawaiʻi, including Christian hymns, Spanish music, and Portuguese instruments. Today, popular music stylings may be adapted, everyone from the Bee Gees and Bob Marley to LeAnn Rimes.

As they say, the beat goes on.

In the following YouTube video, George Kaianapau sings “Nalani”  from 1955:

In the following YouTube video, contemorary band Hūʻewa honors Ka Ua Kilihune, the kilihune rain with song and some hula at the bridge (of the music). It’s from their self entitled CD:

We’re mighty glad they did.

Portuguese Braga and the ʻUkulele

The braga is one of many types of four-stringed instruments known in Portuguese music as the cavaquinho. The steel-string cavaquinho is typically tuned to DGBD with linear tuning. However, the tuning and purpose can vary, for example for a lead, rhythm, or bass instrument.

Hawaiians uniquely adapted the Portuguese instrument to create the ‘ukulele. It is the official modern instrument of Hawaiʻi (the ancient pahu drum being the traditional one). 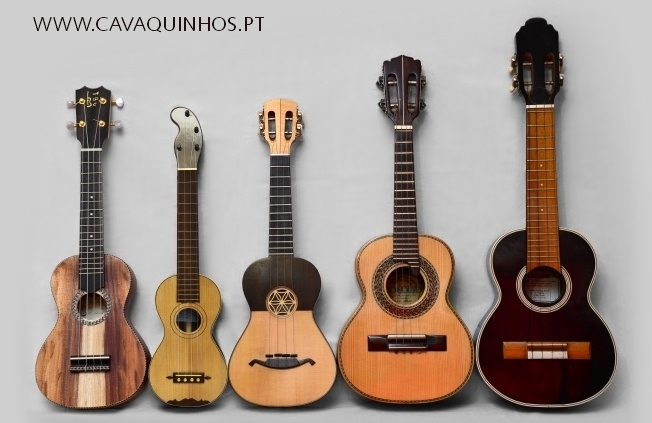 The standard ‘ukulele tuning is GCEA, with a high G, on nylon or gut strings. However, like the braga, the ‘ukulele has many alternative tuning systems, such as baritone tuning (DGBE linear), low-G Tuning (GCEA linear), and D tuning (ADF#B re-entrant tuning one step higher than standard).

‘Ukulele come in different sizes from 20 to 30 inches. From smallest to largest, they are: soprano, concert or alto, tenor, and baritone. Soprano is the most popular, most students learn on a concert. The “best” size is personal preference, often dictated by the size of the player’s hands.

There are many other types of ‘ukuleles, including: sopranissimo, pineapple, coconut shell, turtle shell, cigar-box, cutaway, double-hole, steel-string, six-string, eight-string, and the Liliʻu (8-string Concert ukulele).

Ki hoʻalu (Hawaiian for “loosen the key”) is is characterized by a finger-picking style while playing a guitar with loosened or “slacked” strings, which gives richness to the melody.

There are many different tunings for ki hoʻalu, often based on a Major key. Tunings were historically kept secret within families.

The melodies played were often meant to evoke nature: wind, rustling leaves, lapping water, or birds singing. Besides nature, there are also many haunting renditions about aloha, loved ones, and the beauty of the Islands.

King Kalākaua (1836-1891) was descended from a famous traditional chanter. He became skilled in writing and composing modern music. He wrote the popular love song “Akahi Ho’i”. But his most famous songs is “Hawaiʻi Ponoʻī (“Hawaiʻi’s Own”), the Hawaiʻi State song.

In the following YouTube video, you can enjoy the Hawaiʻi State anthem “Hawaiʻi Ponoʻī, written by King Kalākaua:

After his death, Kalākaua’s sister Lili’uokalani (1838-1917) became queen, until the overthrow of the Hawaiian Kingdom on January 17, 1893 by a group of American businessmen led by Sanford Dole. Like her brother, Queen Lili’uokalani was a gifted composer. Her most beloved melody is the poignant “Aloha oe,”, one of the most popular and well-known Hawaiian songs today.

In the following YouTube video, you can join Ukulele Underground for this Ukulele Play-Along of “Aloha ‘Oe” (Farewell to Thee):

And with that, we say Aloha and hope you know more than you did before about the range and beauty of Hawaiian music, then and now.

We keep a short list here of the places you can expect to routinely listen to Hawaiian music in various styles—we update the list from time to time as we hear about new shows. For more Hawaiian music, see our calendar list of upcoming events below.

The following events from our calendar include traditional and contemporary Hawaiian music and hula.