Every month on the first Friday, the Honolulu Arts District and Chinatown host a street festival featuring the art galleries, shops, restaurants, live entertainment, street vendors, and more. Many establishments offer discounts, food and drink specials, and free entertainment. Most shops are open from 5-9PM, but you can party into the night at bars and clubs throughout the neighborhood. 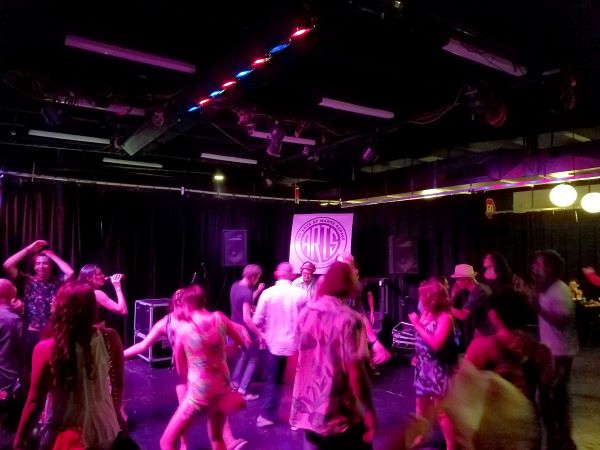 About Honolulu Arts District and Chinatown

Downtown Honolulu is bounded by Nuʻuanu Stream to the west, Ward Avenue to the east, Vineyard Boulevard to the north, and Honolulu Harbor to the south. It comprises four districts: the Capitol District, Chinatown, the Central Business District, and the Waterfront. Each neighborhood boasts its own unique cultural, historical and social features. Places of interest include Iolani Palace, Kawaiaha’o Church, the King Kamehameha I Statue, Washington Place (the Governor’s mansion), and Honolulu Hale (Honolulu’s City Hall). A new high-intensity mixed-use IwileFi district is under transformation as an extension of Downtown.

The Honolulu Arts District is roughly 12 blocks, sandwiched between downtown Honolulu and Chinatown. The Arts District is defined by the Nimitz Highway along the waterfront and mauka to Beretania Street, between Bethel and Smith Streets.

Chinatown continues west of Smith Street to River Street along the Nu’uanu stream. Over the years, an eclectic mix of cultures have settled in Chinatown—named for the primary inhabitants at its inception in the mid 1850s. Today, there is a mix of Japanese, Vietnamese, Thai, Laotian, Korean, Filipino, and Portuguese, as well as as well as Native Hawaiians and Caucasians. It is one of the most ethnically diverse areas in Honolulu. The neighborhood has weathered ups and downs through the decades following the 1886 and 1900 fires, through World War II in the 1940s, the effects of the 1959 opening of Ala Moana Mall two miles east and Hawai’i statehood, then later decades shifting urban populations plus influences from the developing tourism trade. The area is re-inventing itself once again.

In the mid-1800s, Honolulu’s now historic Chinatown began to develop when immigrants came to work in the sugar cane fields on 5-year contracts. After their contract ended, many Chinese workers settled as residents in the area along Nu’uanu stream. Some bought land and built businesses.

In 1886 and 1900, the area was twice decimated by fire. The 1886 fire started in a restaurant and burned for three days, destroying eight blocks. The second fire was purposely started on January 1, 1900 to eradicate the bubonic plague which was raging through the neighborhood. Unfortunately, winds whipped embers from one of the 41 fires onto the wooden Kaumakapili Church steeple. The fire truck pumps could not reach the steeple and the fire began to spread. It burned for 17 days and destroyed almost all of the wooden structures in Chinatown.

A few buildings survived the fire, but most buildings you see today in Chinatown were built between 1901-1920 and are constructed of brick, stone, and concrete. The following lists include some of the survivors and some of the newer buildings, all of which can be visited in Chinatown today. Look for them during your First Friday art walk. The stories they could tell….

On the first Friday of every month, the Honolulu Arts District and Chinatown are alive with art exhibits and entertainment in a street festival atmosphere featuring an exciting mix of of artists, tourists, and locals. Explore art galleries, boutiques, and street vendors while enjoying live entertainment throughout the neighborhood.

After the shops close, Chinatown’s bars and clubs remain open for drinking, dancing, and music.

Here are a few suggested routes around the neighborhood: