The presence of stinging box jellyfish on Oʻahu beaches has been increasing since 1988. Below you can read about this variety of jellyfish found in Hawaiian waters, how to avoid them, and what to do if you get stung—don’t worry, you might cry but won’t die.

Box jellyfish are found in shallow tropical sea waters, especially in quiet areas such as bays. They have a square-shaped body or bell—hence the common name. Extending from the bell are four tentacles, which are lined with microscopic stinging cells. The stinging cells fire barbs that penetrate your skin and deliver toxin that causes redness and a burning sensation.

Jellyfish relatives include sea anemones, corals, and the Portuguese (and Pacific) Man o’ War—often called a jellyfish—are instead a species of siphonophore (never mind looking it up, the explanation is a perplexing jumble of marine vocabulary. But I digress…).

There are about 50 species of box jellyfish in the world. Only a few have venom that can be fatal in humans. In the Indo-Pacific region and northern Australia, the prevalent box jellyfish is Chironex fleckeri, a different species than the Hawaiian variety. Also called a sea wasp, C. fleckeri is extremely poisonous. Dozens of deaths have occurred over the past 100+ hundred years. Here’s a photo of the Chironex: 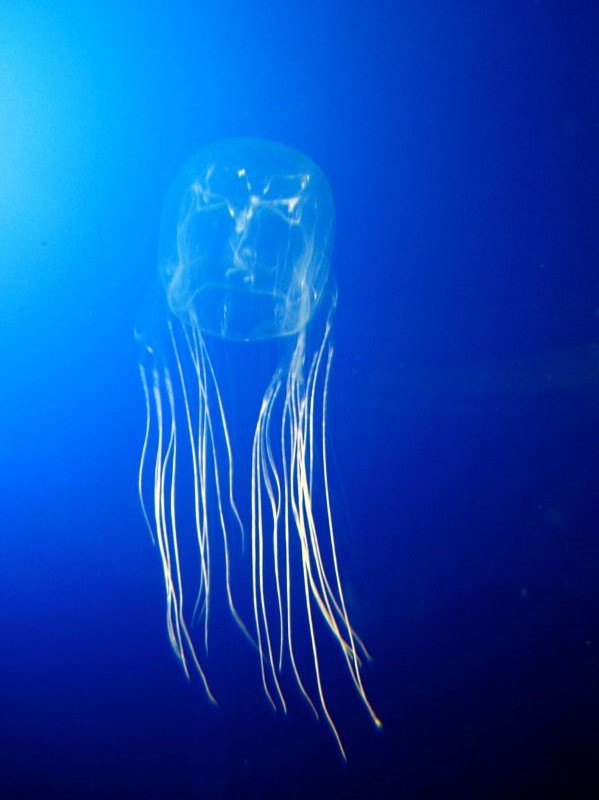 Common in the western Pacific, the very poisonous box jellyfish, Chironex, aka sea wasp (cropped) 2007 photo by Guido Gautsch of Australia at an aquarium in Japan. (CC2)

The most common species of box jellies in Hawaiian waters are: Carybdea rastonii, C. sivickisi, and Alatina alata (aka C. alata)—see a photo below. The latter is the largest of the three, yet only one to three inches in size. When swimming, box jellies are nearly transparent as they gracefully glide and float through the water.

The presence of box jellyfish in Hawaiian waters has been increasing since 1988. One theory is that box jellyfish become trapped in the shallows after high tides at night, when they are carried over the reef. Other theories elude to mating rituals and climate change. 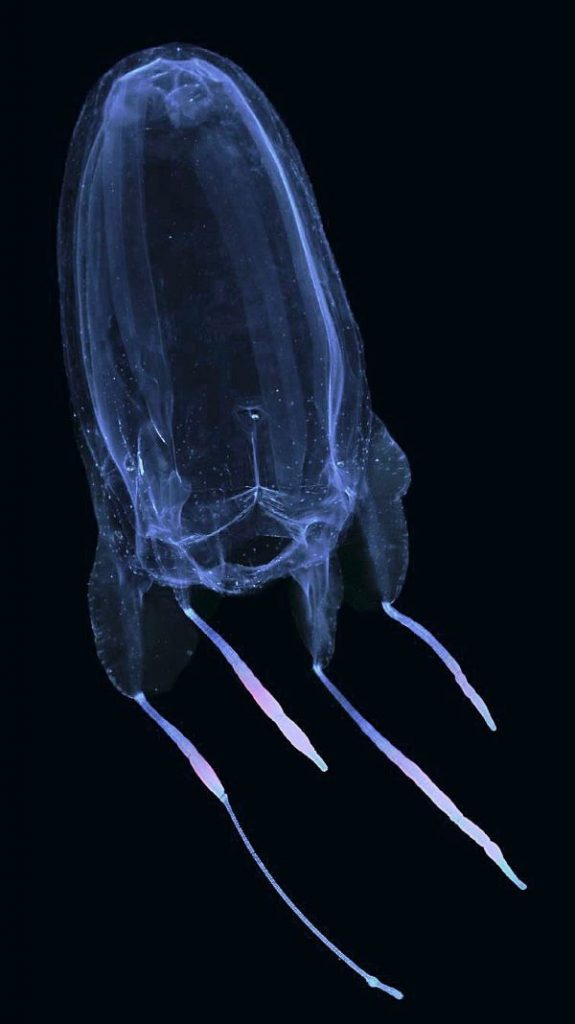 Box jellyfish are quite small sea creatures often bobbing near the surface. Their small squarish body is just one to three inches, with tentacles that trail behind as they swim. In the water, box jellies are clear and can go unnoticed. However, they often arrive in large groups of hundreds of jellyfish, which are quite obvious.

When do box jellyfish appear?

The occurrence of box jellyfish in Hawaiian waters is quite predictable. They tend to show up in large numbers once a month, 8-12 days after a full moon, and remain up to five days. But as with most things in nature, the timing can vary from month to month and by location. For example, they might also appear after stormy weather.

Aside from full moons and storms, look for signs posted at popular beaches warning about the presence of stinging jellyfish. You’ll have to decide whether to risk a swim. You can also check the Waikīkī Aquarium jellyfish calendar before planning a beach day: http://www.waikikiaquarium.org/interact/box-jellyfish-calendar/, which estimates jellyfish arrival dates.

Just remember that jellyfish may also be present on any day of the year. Always obey warning signs posted on beaches. Swim on guarded beaches only and ask a lifeguard about the presence of jellyfish and other ocean hazards that day.

Where do box jellyfish appear?

In Hawaiʻi, box jellyfish most often appear on the north shore at Waimea Bay and south shore beaches (Ala Moana, Waikīkī, Haunama Bay).

Less often, they may be found on western or leeward beaches (the Waianae Coast, Makaha) and the eastern or Windward Coast (Kailua, Kāneʻhoe Bay, Lanikai, Waimanalo, Makapuʻu, etc.). Be aware that on windy days on windward beaches (in the water and on the beach), you may experience Portuguese Man-O-War. They are small, blue balls with long tentacles that sting, though not as painful as the box jellyfish.

What to do if you are stung by jellyfish

Spray or rinse the affected area with vinegar. See other possible treatments for jellyfish stings below, including what NOT to use.

Sensitivity to jellyfish stings vary from one person to another. If you seem to have a severe reaction (for example, you feel unwell or have difficulty breathing), get help immediately from a lifeguard or call 911. In severe cases, jellyfish stings may cause an anaphylactic shock that can lead to death.

The follow are treatments for jellyfish stings are recommended by researchers from the University of Hawaiʻi.

We also recommend shave ice—to soothe your insides, not the sting! (In fact, icing the sting is NOT a good idea…read more about what NOT to do in the next section.)

DO NOT use these methods to treat jellyfish stings

The follow are treatments have been found to be ineffective or make the stinging worse.

Here’s a short YouTube video from KHON2 News in Honolulu about what to do if you’re stung by a box jellyfish:

Listed below are the expected dates when box jellyfish will be prevalent at Oʻahu beaches, most typically at north shore (Waimea) and south shore beaches (including Ala Moana, Waikīkī, and Hanauma Bay). But stinging jellyfish can also appear on other dates and beaches at leeward (western) beaches and windward (eastern) beaches. So, check the local information if you are in the water on these dates–or every time you visit any beach.