A special film screening of the documentary “Betty White: 100 Years Young” will be shown in theaters across the country on January 17, 2022.

Our hearts mourn today with the passing of Betty White. During the many years we worked with her, we developed a great love and admiration for Betty as a person, and as an accomplished entertainer. We are thankful for the many decades of delight she brought to everyone. Betty always said she was the “luckiest broad on two feet” to have had a career as long as she did. And honestly, we were the lucky ones to have had her for so long.

We will go forward with our plans to show the film “Betty White: 100 Years Young” on January 17 in hopes our film will provide a way for all who loved her to celebrate her life—and experience what made her such a national treasure.

This celebration of America’s sweetheart is an opportunity to remember Betty White’s amazing life and career. It’s a time to come together and enjoy Betty’s classic moments on The Golden Girls, SNL, Hot in Cleveland, The Proposal, and The Mary Tyler Moore Show, among others. Drawing from her final interview, this film provides a backstage look at her career, and insights into what was most important to her.

Plus hear from the friends who loved her, including Ryan Reynolds, Carol Burnett, Valerie Bettinelli, Jennifer Love Hewitt—and dozens of other celebrity friends who offer their tribute to this beloved icon.

Fathom operates the largest cinema distribution network with over 1,100 participating locations and over 2,100 screens worldwide. The company delivers a wide variety of programming and experiences including documentaries, faith-based and inspirational content, anime, performing arts, and classic film to moviegoers worldwide.

Betty Marion White (1922 – 2021) was an American actress, producer, and author. Her eight-decade career began in 1939 in radio and early television.

Whites career included appearances as a game show panelist (Password, Hollywood Squares, $25,000 Pyramid and several more) and guest appearances on many shows. She is best known as the saucy Sue Ann Nivens on the CBS sitcom The Mary Tyler Moore Show (1973–1977) and Rose Nylund on the NBC sitcom The Golden Girls (1985–1992). She gained late career fame as host of Saturday Night Live in 2010 and played Elka Ostrovsky on the TV Land sitcom Hot in Cleveland (2010–2015).

White received eight Emmy Awards in various categories, three American Comedy Awards, three Screen Actors Guild Awards, and a Grammy. She has a star on the Hollywood Walk of Fame and was a 1995 Television Hall of Fame inductee.

Movie show times at all theaters are 1pm, 4pm, and 7pm. 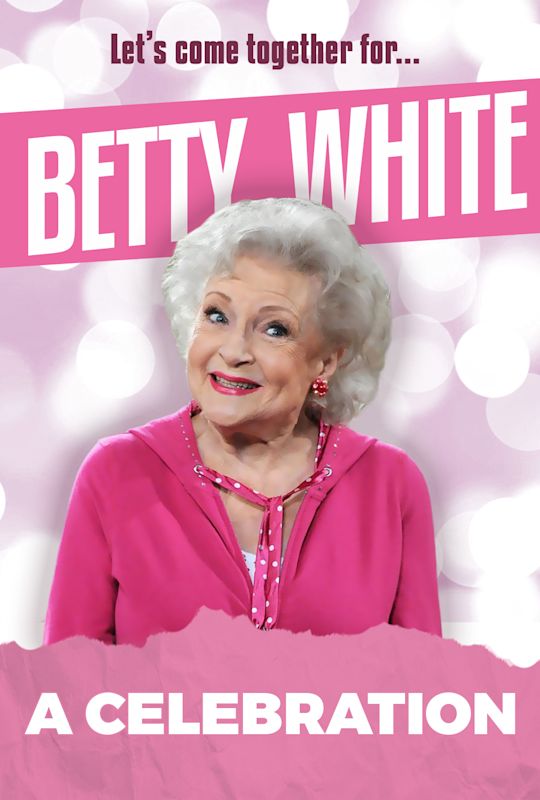