You are here: Home / Events / Celebrating Mardi Gras in Hawai’i

Mardi Gras translates from the French as “fat Tuesday”. The holiday has roots in the Christian liturgical calendar. It marks the end of Carnival season and the beginning of Lent. Mardi Gras in New Orleans, LA (NOLA) is our country’s most celebrated location for Fat Tuesday. NOLA traditions include parades, carnival masks, beads, and sweet indulgent “King Cakes”. 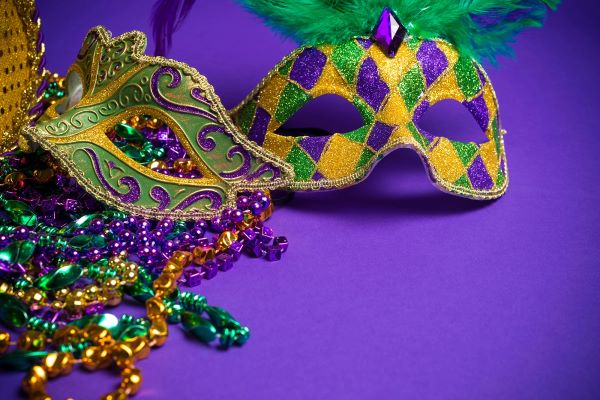 The colors of Mardi Gras are purple (justice), green (faith), and gold (power). Everything from masks to beads and cakes will bear these colors. – DepositPhotos.com

About Carnival, Mardi Gras, and Lent

Carnival season begins on the Epiphany or January 6, the day the Magi followed a bright star to Bethlehem, where they visited the newly born Christ child. Like many holidays, Carnival is celebrated with traditional foods and plenty of revelry. Mardi Gras is the last day of carnival, celebrated several weeks later on the day before Ash Wednesday, which marks the beginning of Lent.

In Christian tradition, Lent is a time for fasting, repentance, and alms-giving. The period that lasts for 40 days, until the Saturday one week before Easter Sunday—the day of Jesus resurrection from the dead in 30 A.D. Fat Tuesday is one last day of overindulgence before the long stretch of Lenten denial. Fat Tuesday is also known as Shrove Tuesday and Pancake Day.

Traditional foods for Carnival and Mardi Gras include cakes, doughnuts, and pancakes, containing eggs and butter—rich foods and ingredients that are forbidden during the austerity of Lent. The colors of Mardi Gras are purple, green and gold, representing (respectively) justice, faith, and power. Everything from cakes to masks and beads will bear these colors. 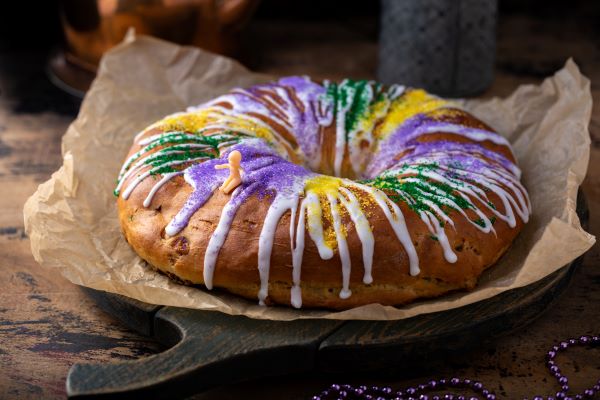 A ring-shaped King Cake decorated in Mardi Gras colors. Traditions vary in different countries as to the type and shape of the celebratory cake. Some placed refer to it as an “Epiphany Cakes”. – DepositPhotos.com

Like many aspects of life in Hawai’i, we put some Aloha into our celebrations. Here are a few ideas for celebrating Mardi Gras with island flair.

Malasadas. For Mardi Gras, it is customary to indulge in malasadas, also known as Portuguese donuts (“donuts without holes”) for Mardi Gras in Hawai’i. When Portuguese immigrants came to Hawaiʻi to work on the sugar plantations, they brought with them these sugar-coated deep-fried pastries. Begin Catholic, they especially indulged in these sweets on Mardi Gras, which were then given up for Lent. Here are some popular locations around the islands for malasadas:

Roast pig. In New Orleans, some groups begin carnival by roasting a pig. Sam Choy’s oven-roasted kalua pig recipe is an easy, delicious, and affordable alternative to firing up an imu.

Coconuts. Handing out Coconuts during Mardi Gras parades was a tradition in past decades in New Orleans. Today, long plastic beaded necklaces in traditional colors of purple, green and gold have replaced most other trinkets. In Hawaiʻi, coconuts painted in Mardi Gras colors might be used as seasonal décor around your home. Or, leave them secretly on your neighbors’ doorsteps!

As always, we focus on free and cheap events. Since Mardi Gras is 47 days before Easter Sunday and Easter can fall anywhere between March 22 and April 25, we usually begin updating Fat Tuesday events in January or February for the current year.)