You are here: Home / Expired / Oʻahu: Worth a splurge? Beyond Monet digital art exhibit thru Aug 14
← Introduction to Hawaiian music styles and instruments
Treasured heiau you can visit on every Hawaiian island →

Honolulu is excited to welcome over 400 of Claude Monet’s artworks for the large-scale digital art exhibit “Beyond Monet”. Digital art exhibits have been increasingly popular around the globe, drawing crowds to sold out shows. Audiences flocked to last year’s “Beyond Van Gogh” exhibit in Honolulu.

Beyond Monet is the largest immersive experience in the country comprised of over 4 trillion content pixels and over 30,000 square feet of exhibit space. Created by French-Canadian creative director Mathieu St-Arnaud and his team at Montreal’s Normal Studio, the show uses the latest projection technology set to an original score.

The Honolulu Convention Center exhibit space will be transformed into an ethereal representation of the French impressionist painter’s works. The stunning experience promises to break conventions with a spectacular audio-visual journey. Monet’s artwork is expanded through music, sound effects, and scenography. People of all ages can scrutinize every brushstroke as Monet’s artwork swirls around them. 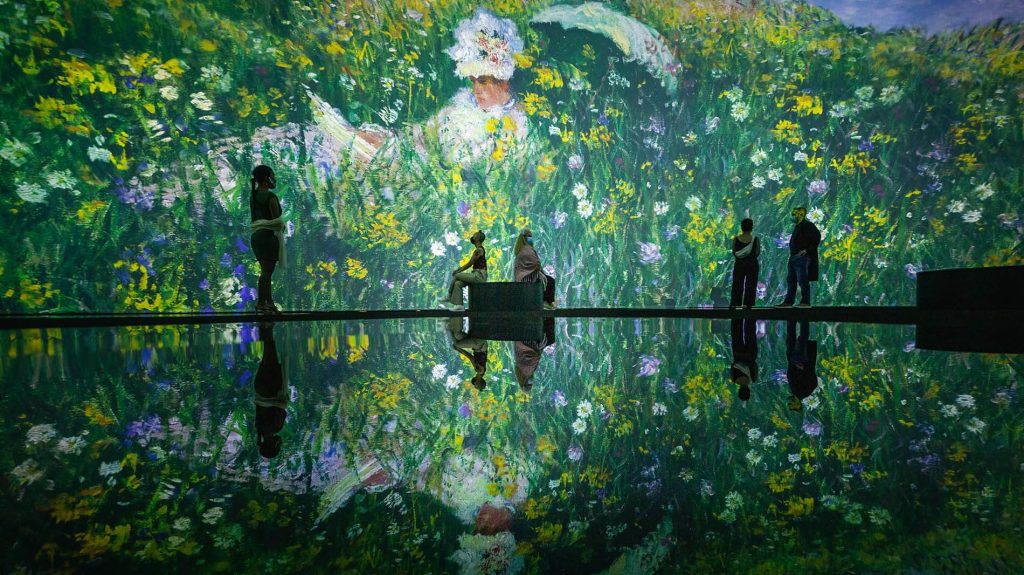 Beyond Monet exhibit in Toronto

Claude Monet (1840-1926) was a French painter who was born in Paris. His family moved to the coastal city of Le Havre in the Normandy region (130 miles northwest of Paris, bordering La Manche aka English Channel) where he studied art in school. As a young man, he was known for charcoal caricatures, which he would sell for ten to twenty francs.

Eugène Boudin (1824-1898), who is especially known for seaside landscapes and splendid renditions of the sky, befriended the teenage Monet. Boudin encouraged Monet to give up the childish charcoal drawings and taught him how to paint with oils “en plein air” (painting outdoors). Boudin never considered himself an innovator, though his influences on Monet’s impressionist style are evident.

Monet rejected the conventional realism of landscape painting. The Romantic and Realist paintings favored at the time used smooth, barely visible brushstrokes and somber colors that phased one into another. Impressionism is defined by loose, bold brushstrokes and bright, contrasting colors. The “impressionistic” style was considered amateurish and rejected at the conservative, juried exhibitions at Salon de Paris.

He was not alone. Monet and some of his other rejected contemporaries formed the “Société Anonyme des artistes, peintres, sculpteurs, graveurs” (Anonymous Society of Painters, Sculptors, and Engravers). Their names are well-known today, including Pierre-Auguste Renoir, Edouard Manet, Edgar Degas, Paul Cézanne, and Camille Pissarro. In 1874, the Anonymous Society organized an independent exhibition

The 1874 show later became known as The First Impressionist Exhibition. The show included 165 pieces of work by 30 artists including Cezanne’s “A Modern Olympia”, Monet’s “Impression, Sunrise”, and Renoir’s “The Dancer”. The self-promoted show was a radical idea, bucking the sanctioned Salon. By 1886 the Anonymous Society had held eight major exhibits. and Salon de Paris was not the only game in town.

Monet produced many series showing the different effects on a subject caused by the time of day, seasons, or weather. Examples include the Haystacks series of 1890-91, the Rouen Cathedral paintings of 1892-94, and perhaps the most famous (if not most prolific) Water Lilies at Giverny (1884-1926). He was also inspired by Japanese art—a Japanese bridge plays prominently in many of Monet’s paintings.

Today, Monet’s original works are exhibited in museum collections around the world including the Musée de L’Organerie in Paris, the Museum of Modern Art in New York City and the National Gallery in London. 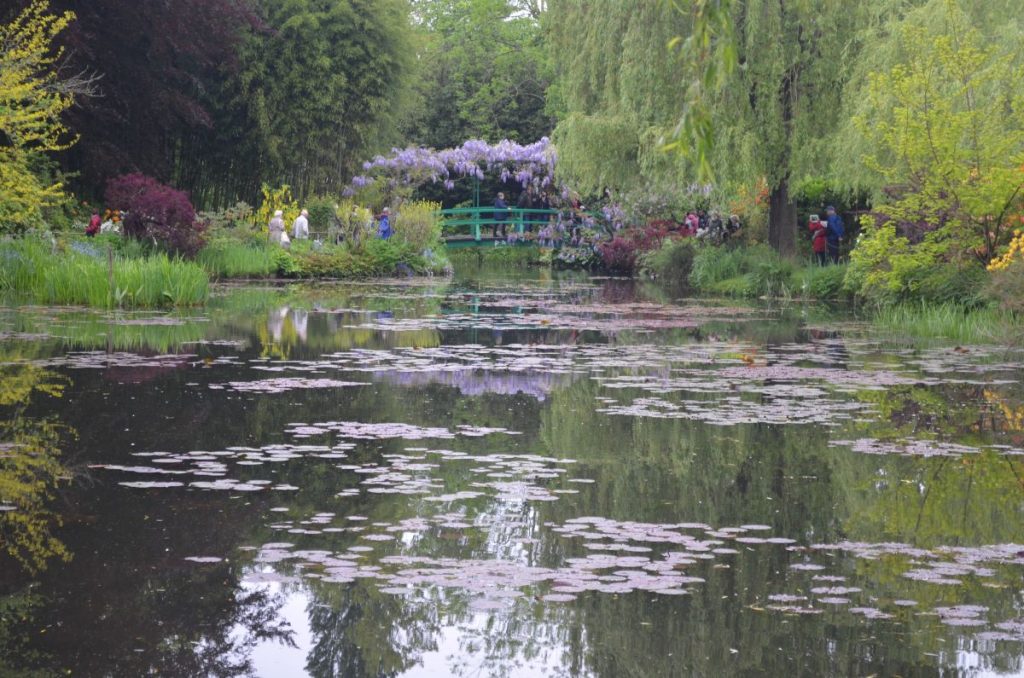 The bridge over the lily pond in the garden at Claude Monet’s home in Giverny France – Depositphotos.com

About Beyond Monet Honolulu

Tickets: Advance purchase, timed entry only. Tickets are non-refundable. No tickets sold at the door.

Parking: $12 on-site beginning one hour before until one hour after the event. Enter the parking garage from Kalakaua Avenue. More info: Parking and Driving Directions – Hawaii Convention Center (meethawaii.com) 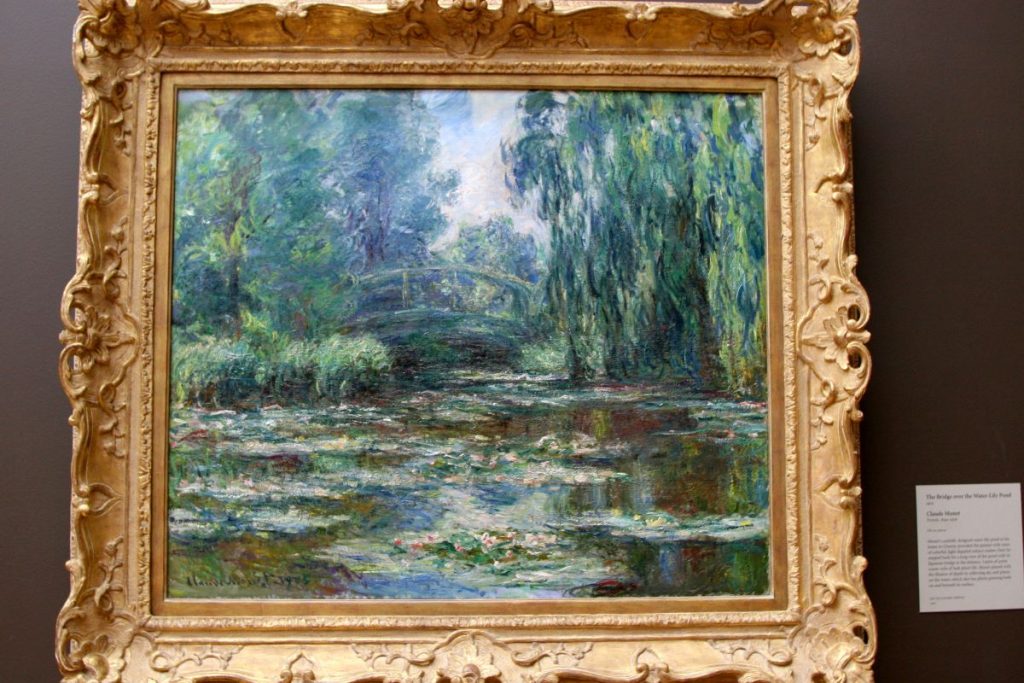 Photo of the Claude Monet painting “The Bridge over the Water-Lily Pond” – Depositphotos.com